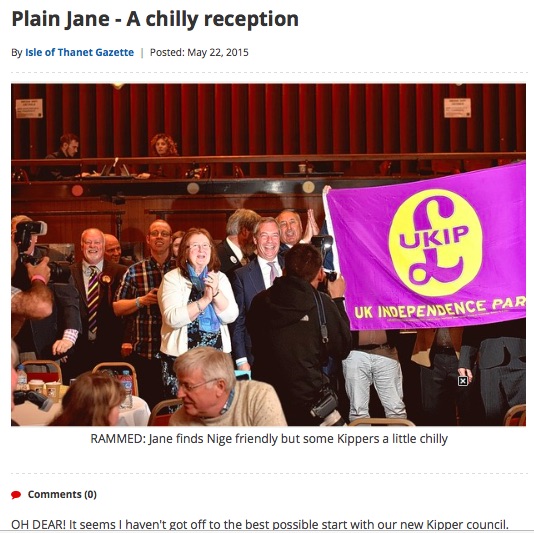 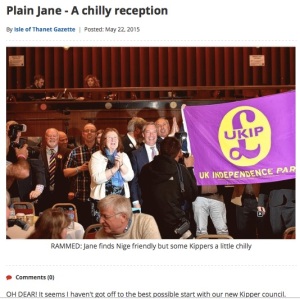 OH DEAR! It seems I haven’t got off to the best possible start with our new Kipper council. Let’s hope I don’t require a new wheelie bin in the next five years.

The Winter Gardens was rammed on the night of the general election with 150 members of national and regional media poised to see Nigel Farage’s moment of – what turned out to be non-glory.

Two days later, the much smaller band of – mostly local – hacks were still looking tired, but I arrived to see an apparently restored, grinning and hand-clapping Mr Farage – or “Daddy” as one successful candidate rather nauseatingly dubbed him – leading his merry band in the cheers and flag-waving as we watched TDC turn purple.

It is not what one would have chosen, not least because most of the new intake have never done it before, but since I would usually go for people not parties in local elections, I decided to approach proceedings with an open mind.

When I found myself in the coffee queue with two purple rosettes, and a hand was extended my way, I shook it. John Buckley HAS done it before, he told me.

Newly elected to the Beacon Road Ward, he explained he had previously represented Broadstairs & St Peters town council for Labour. When I expressed surprise at this profound leap of allegiance, he countered it with his support of Manston.

Far be it from me, an ardent airport fan, to disagree, but my eyebrows remained raised. But wasn’t he, I asked nicely, a little concerned about a certain element that UKIP tended to attract? Mr Buckley opened his mouth to begin what sounded like a reasoned reply, and was drowned out by what I can only describe as a squawking from the second rosette. I will not bore you with the entire exchange, suffice to say that it included much huffing, puffing and eventual storming (hers) from the queue, some ineffectual attempts at pacification (Councillor Buckley’s) and the rather curious accusation being hurled my way that I made racist comments myself in what had suddenly become MY paper.

UKIP, it seems, also tend to attract people who don’t listen, don’t understand, don’t want to engage in rational debate and who think that the best way to win round a sceptic is by shrieking about the shortcomings of the Socialist Workers Revolutionary Party (I don’t like them much either) and complaining that a councillor from the Labour party had called one of their number a fascist. Entertaining as all this was, I think we can be thankful that the lady in question is only married to a Kipper (not Mr Buckley, I should perhaps make clear) and not standing for office herself. Council meetings, I fear, will be chaotic enough already.

Word clearly got round for there was a definite chill coming from factions of the purple camp for the rest of the afternoon. Ironically, the only one who looked pleased to see me and offered a smile, was Nige himself! But: “we have cleaner streets already”, tweeted a local in protest at my cynicism, “or is it my imagination?” I think it might be, love. It took the new lot a week to get email addresses, let alone the dog mess cleared up, but let us wait and see. My mind stays just about propped open. And if it turns out I’m wrong to feel quiet dread, I shall say. In the meantime I shall watch and I shall listen. Lady of UKIP who never got her coffee – you should try it some time… 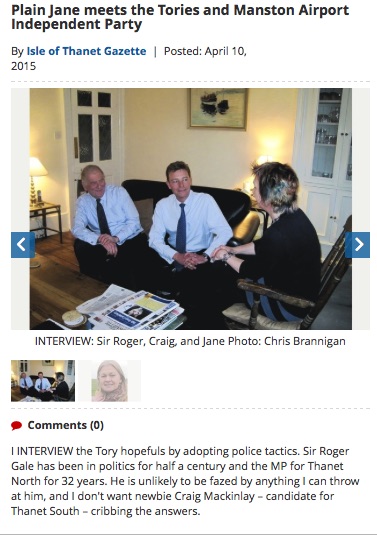 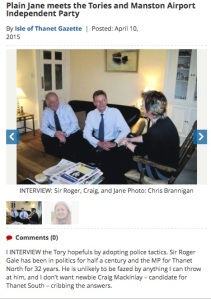 Next week: Mike Pearce on the Election Flipside…

You can read the original article at: http://www.thanetgazette.co.uk/Plain-Jane-meets-Tories-Manston-Airport/story-26308450-detail/story.html